The last two years it had become quiet about the "stringster" app from Marc Zwiebler, the 9-time German badminton champion and European champion from 2012. But now the story goes on: Recently the long announced "stringster" update 1.3.0 with pre-stretch function became available in the App and Play Store.

BADLAB spoke to Marc Zwiebler about why this update took so long, what the "pre-stretch" topic is all about and how the "stringster" app should be used.

BADLAB: Marc, you ended your career as a badminton professional in 2017. Have you stayed with the sport in any way?

Marc Zwiebler: Of course! Even after my active career as a sports professional, I remained closely connected to the sport. So I am a board menber of Athleten Deutschland e.V. and of the Badminton World Federation (BWF). And from time to time I even manage to play myself - if my schedule allows, I help out in the first team at EBT Berlin.

BADLAB: Do you still live in Berlin today?

Marc Zwiebler: Yes, privately I was drawn to Berlin, where I was able to gain valuable professional experience as a business strategy manager for Europe's largest sports e-commerce company “Signa Sports United”. Since May 2020 I am managing director of the startup "Kurabu", which has set itself the task of digitizing sports clubs. "Sportsnext Applications", the company behind "stringster" is based in Hamburg. Of course, I will continue to be involved there as a founder and partner. But the CEO here is my co-founder Elmar Sperling, who has also been very busy in the last two years with the integration of his advertising agency into the international agency network "Geometry Global".

BADLAB: But now all of you have obviously found the time to develop "stringster" further. Why is a pre-stretch function such an important additional feature for “stringster”?

Marc Zwiebler: This year was a very unusual one due to the Corona crisis. On the one hand, the sports industry has also suffered a lot, but on the other hand Corona has also emphazised the necessity and benefits of digitization in sport. And in this context "stringster" can be a very interesting component for racket sports manufacturers and retailers. We actually realized very early on that we needed a pre-stretch function in the “stringster” app. In some countries, e.g. Denmark, a lot of stringers work with this method.

BADLAB: Is that the reason why “stringster” is now also available in Danish?

Marc Zwiebler: Exactly! And of course because small Denmark is the most successful badminton nation in the western world.

BADLAB: What exactly is “pre-stretch”?

Marc Zwiebler: Electronic stringing machines have a so-called pre-stretch function. This can be used to briefly overpull the string tension by e.g. 10% before releasing it to the ordered tension level. This type of stringing is particularly relevant for natural gut strings, as the ordered tension is retained for longer. With synthetic strings, however, this method also has the disadvantage that the elasticity of the strings is slightly reduced from the start, because the pre-stretching itself already causes a certain amount of wear out.

BADLAB: How does the "stringster app" deal with the topic?

Marc Zwiebler: When you set up the string in the new "stringster" app 1.3.0 it asks you which method was used to string the racket. This is important because a racket which e.g. was strung with 11 kg in the pre-stretch method, de facto has a higher tension level than a racket that was also strung with 11 kg but without pre-stretch. Together with our development partner "YONEX Stringing Team" we decided to show 11 kg in both cases, because that is the value that the player commissioned - and which he is therefore used to feel as 11 kg when he plays his racket.

From our point of view, this made the most sense, because at the end of the day for both players and stringers it is all about being able to check whether the stringing was done properly.

BADLAB: What do the colored circles around the measurement result in kg or lbs show in the “stringster app” in this context?

Marc Zwiebler: It is not only interesting to know with how many kg or lbs the string was pulled onto the racket. Actually it is even more important for the players to know when their strings are worn out - meaning when the strings have lost their elasticity. Because then power, control and the shock damping performance of the racket are lost to a great extent. Especially for players using the thicker, more durable strings, the “stringster” color scheme helps to decide when the strings should be actively replaced, even if thei may still look ok.

BADLAB: That's right, the progressive loss of string elasticity can definitely be confirmed by our BADLAB racket- and string testers. Thank you Marc for this interview and all the best for your future career!

Marc Zwiebler: I thank you. And I would be happy to see many "stringster" ratings from your readers in the App and Play Store! 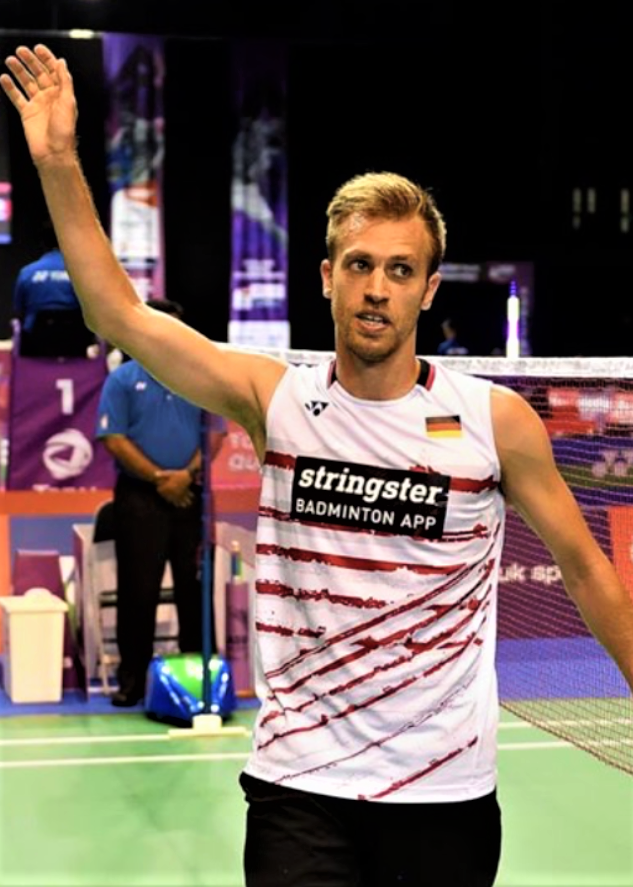